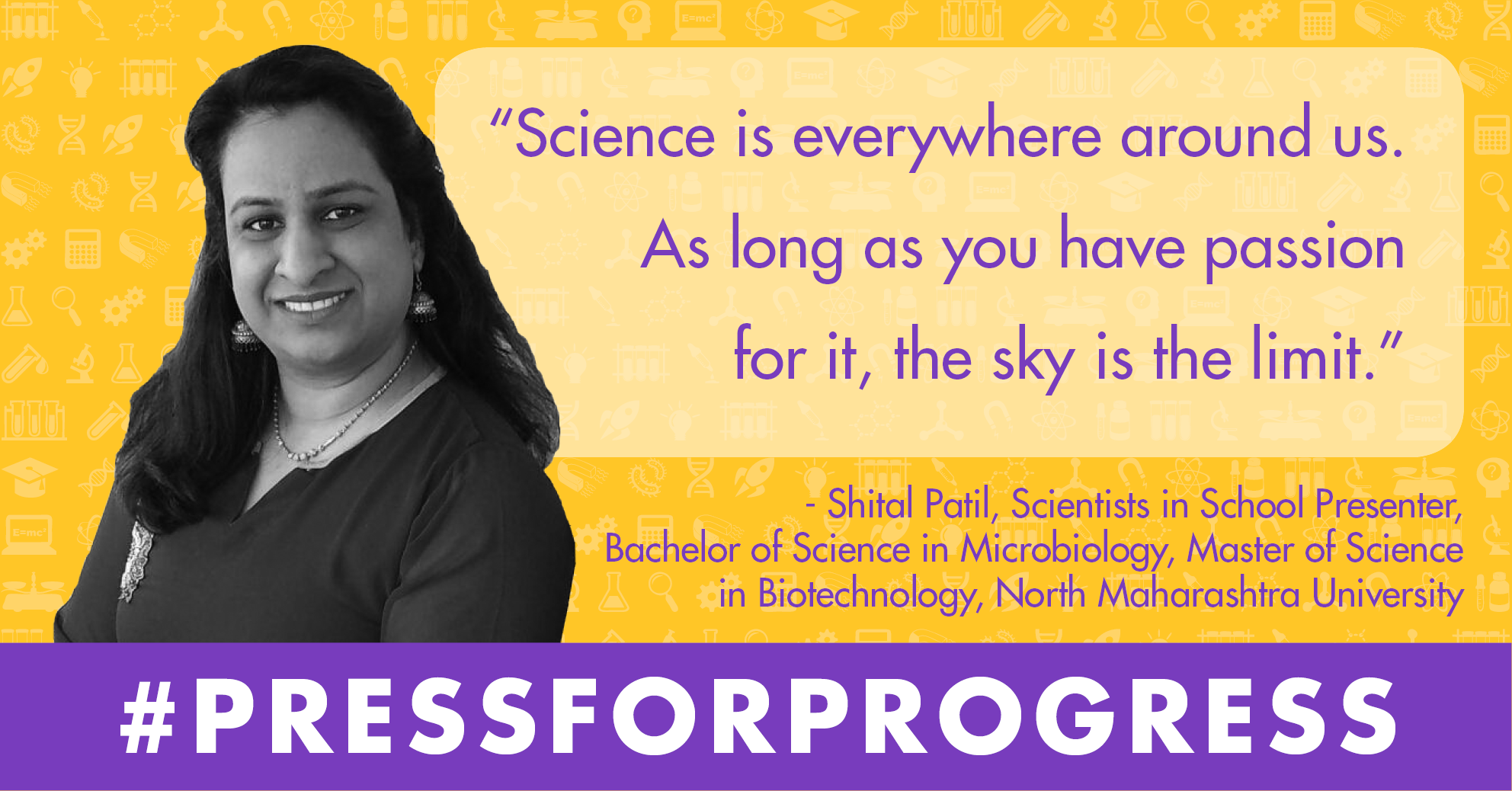 How We #PressForProgress: Shital Patil

To celebrate International Women’s Day, Scientists in School joins thousands in the global push for gender equality. To honour this important day, we’re celebrating our science workshop presenters. Through their important work and accomplishments across various fields, many presenters at Scientists in School have defied gender stereotypes and misconceptions about women in science, technology, engineering and math (STEM). Today, we’re shining the spotlight on one of our fantastic presenters, Shital Patil.

Shital Patil’s love of science began during her exploration-filled childhood in India where she completed her Bachelor of Science in Microbiology and a Master of Science in Biotechnology at North Maharashtra University. Her early career as a research technician in a Plant Tissue Culture lab eventually brought her to Canada where she worked as a Research Assistant in Plant Sciences at the University of Manitoba. Before she became a dedicated science workshop presenter with Scientists in School, Shital also advanced her career by working as a manager in quality control in both the food and pharmaceutical industries.

We chatted with Shital, who for over a year has presented Scientists in School workshops including I Can Be a Scientist, Looking at Liquids, and Soil: It’s Too Important to be Treated Like Dirt! about how she explored and studied nature as a child and why she wants to pass on her scientific passion and knowledge to the next generation.

Why did you become a Scientists in School presenter?

After contributing to various STEM fields for many years, a thought always crossed my mind: How can I pass this knowledge on to the next generation? One day while volunteering at my child’s school, a teacher approached me and suggested that I look into becoming a science workshop presenter with Scientists in School. It happened to be the right opportunity for me and I can’t be happier. I am fulfilling my dreams and encouraging the next generation to choose science!

What made you choose your field and what do you love about it?

I always had a passion for science since childhood. I frequently read various research papers and tried to apply it in my daily life. Being raised in India, I had an ample supply of various plants around me to study the structures of various leaves, flowers and fruits in my spare time. The main thing I love about my field is that science is everywhere around us. As long as you have passion for it, the sky is the limit. I use my science knowledge to earn my daily bread and butter and I also use science to understand the world around me!

How are others impacted by the work done in your field?
After working in a variety of positions in science-related roles in the food and pharma industry, I started to get a feeling that it was time to pass on my knowledge and expertise on to the next generation. As a science workshop presenter in elementary school classrooms, after every workshop when the students tell me that it was the best day of their life and that they love science, I feel I am leaving a positive impact on these growing brains.

When kids meet STEM role models who are like them, how does it impact them, if at all?

It definitely leaves a positive impact on the kids. When my daughters have a Scientists in School workshop in their classrooms, they come home ready to explore more and more around them. They know it’s not magic—it’s science!

Should parents, teachers and STEM role models encourage girls to pursue STEM? Why?

Many girls will have a very important role in helping to raise the next generation, and STEM is very important since it touches every aspect of our lives. Parents, teachers and STEM role models should encourage girls to look around themselves and understand their world scientifically.

How has being a woman in STEM influenced or impacted your career, if at all?

When I go to classrooms as a science presenter, the students tell me that I am just like their mother and they did not think a scientist would be a woman coming to their classroom. I look at this as a very positive influence on their early perceptions and confidence. When they tell me it’s the best day of their life, I just know I have made a positive impact!

Stay up to date with our International Women’s Day series on Twitter, Facebook and LinkedIn, and let us know who your STEM role models are!

How We #PressForProgress: Amy Hobbs Berg

Encouraging students to think critically about their world with STEM education