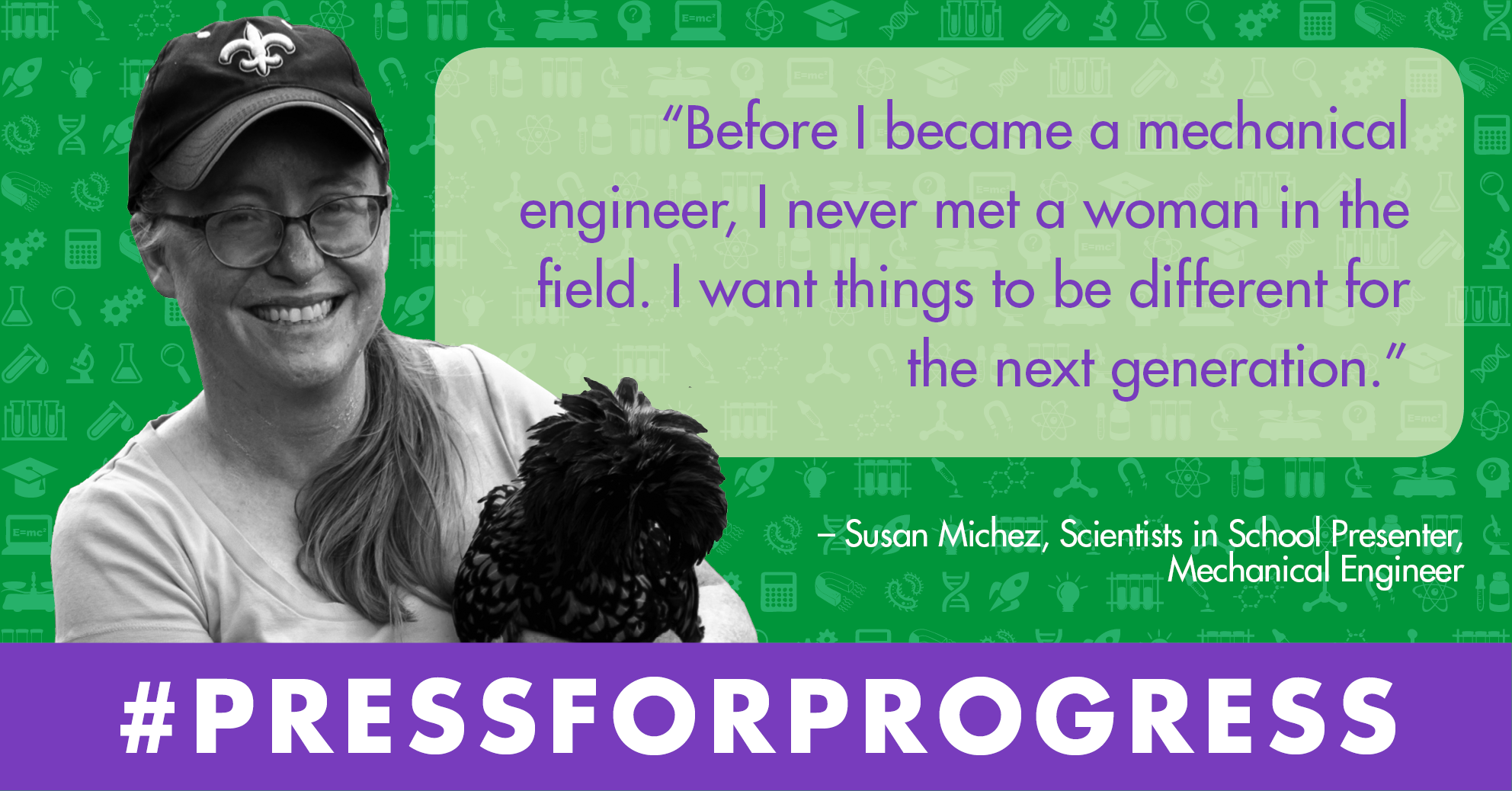 How We #PressForProgress: Susan Michez

To celebrate International Women’s Day, Scientists in School joins thousands in the global push for gender equality. To honour this important day, we’re celebrating our science workshop presenters. Through their important work and accomplishments across various fields, many presenters at Scientists in School have defied gender stereotypes and misconceptions about women in science, technology, engineering and math (STEM). Today, we’re shining the spotlight on one of our fantastic presenters, Susan Michez.

Susan Michez landed the gig that many children dream of doing: From 1993 to 2002, Susan worked at Pratt & Whitney Canada (P&WC), a company that produces jet, propeller and helicopter engines. Starting out as an engineering trainee, Susan worked her way up to become a Senior Component Engineer. At PW&C, Susan traveled internationally to work with military personnel, engine manufacturers and oil manufacturers from all over the world to represent the company’s work on Propulsion Lubricants. Before she became a professional engineer in 2000, Susan studied mechanical engineering at the University of Toronto where she graduated with a Bachelor of Applied Science with honours.

When she’s not presenting Scientists in School workshop topics like Systems at Work, Susan is busy supporting her daughter’s First Robotics Team. With a desire to inspire youth to think about engineering in their everyday lives, Susan has volunteered with various schools to run engineering activities and has spoken at several career days.

We spoke with Susan, who has been a science workshop presenter with us for over a year, about how her parents introduced her to positive female role models, how that impacted her career path and how mechanical engineering effects our everyday lives.

Why did you become a Scientists in School presenter?

Like many people, work-life balance is important to me. When my children were young, I chose to take a step back from my career in order to spend time with them. At a mother’s group I attended I made friends with a woman named Jennifer who happened to be a Scientists in School presenter. She told me that I should consider being a presenter, too, as my education and career experience would be an asset to the team. I’m glad I took her advice!

What made you choose your field and what do you love about it?

I loved math in high school and originally thought that would be the field I would enter. However, I had a wonderful physics teacher named Mr. Bell who opened my mind up to the practical uses of math and science. I love being able to solve problems and see math in action. He made science so real and applicable to my life, and thanks to the way he taught, I wanted to learn more about careers in STEM. When I asked him what his degree was in, he told me it was engineering. He’s the reason I looked into becoming an engineer.

Is there someone else who inspired you to go in to STEM, other than Mr. Bell? Who is your STEM role model?
My parents inspired me to take an interest in science by making sure all the doors were open to me. As a child they made sure I had the full range of toys–including toy cars and trucks–not just the ones at the time that were designated as “girl’s toys.” They bought me books that showed women as pilots and race car drivers and doctors. My parents faced some negative feedback for this in the 1970s, but they persisted. They even sent me to space camp one summer in the U.S. for a week.

How are others impacted by the work done by mechanical engineers?

Mechanical Engineering helps the world! Whether it is your heating and air conditioning system at home, how a building responds to an earthquake, what makes your car work, or launches a rocket ship to Mars, odds are a Mechanical Engineer has been involved in the design and problem-solving at some point along the way.

How has being a woman in STEM influenced or impacted your career, if at all?

When I graduated from university, it was a tough time to find jobs in my field. I was one of the lucky ones and got a job right away. Mechanical Engineering at that time was very male-dominated, and I found that some of my co-workers were uneasy with women being hired. It expressed itself openly in one meeting as one man demanded to know if the women that had just been hired were just there to fill a quota or actually had the same skills as the men. From this and related experiences I learned to have a tough skin and to let my work speak for itself.

Should parents, teachers and STEM role models encourage girls to pursue STEM? Why?

ALL children should learn to appreciate the role of STEM in our everyday life. For those with a skill or a passion for math and science – regardless of gender – engineering has a whole world of careers to explore. If girls don’t see STEM careers as being available to them, not only do they lose out, but society loses out too. How can we solve the big problems of the world without more than 50% of our population?

Stay up to date with our International Women’s Day series on Twitter, Facebook and LinkedIn, and let us know who your STEM role models are!

How We #PressForProgress: Kathy Morch

How We #PressForProgress: Karen Hillis

How We #PressForProgress: Rina Chua-Alamag