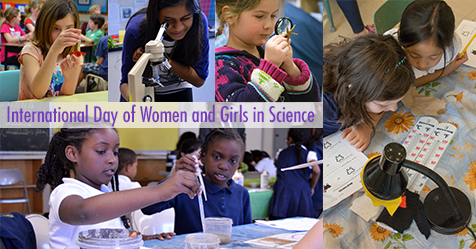 On International Day of Women and Girls in Science, we recognize the need for more opportunities and equality for women and girls in science, technology, engineering and math (STEM). While there’s still much work to do in order to achieve this imperative goal, it does not diminish the phenomenal impact that women and girls have made through their inquiry and imagination so far.

At Scientists in School, the majority of our classroom workshops presenters are women with a post-secondary degree or a career in STEM. Since we started bringing hands-on science to students in 1989, our presenters have been crushing the stereotype of what a scientist looks like. In the 2016-17 school year, our 375 presenters spent 2,000,000 face-to-face hours with almost 700,000 children and youth across Southern Ontario and Alberta.

We must celebrate the accomplishments and efforts made by women and girls in STEM, not just on International Day of Women and Girls in Science, but every day. Here are 8 incredible thinkers and creators who have made an impact on the lives of others through STEM.

As the Director of Ryerson University’s SciXchange, a national centre that promotes science outreach and helps make science engaging for all, Professor Emily Agard works toward making science accessible and inclusive. From her early years as a biology professor at York University and University of Toronto at Scarborough, to her time as an Associate Professor at Ryerson University, Professor Agard has dedicated over a decade to creating opportunities for youth from a wide range of socioeconomic backgrounds. At SciXchange, which provides students various opportunities to learn through science with events and initiatives like Science Literacy Week, Soapbox Science and Science Rendezvous, Professor Agard has helped provide science enrichment and mentoring programs for youth. Most recently, Professor Agard received funding from NSERC’s PromoScience program to help fuel the new Youth Engagement through Soapbox Science (YESS) initiative. As this new initiative connects youth with women who are making incredible advances in STEM, Professor Agard is a leader to watch and admire.

Congrats to #24under24 Leader, Bethany Downer. @BethanyAstro founded https://t.co/sGesMXFWkf to excite people about #space & One Step Shoe Recycling to keep 15K lbs of trash out of landfills!

At the mere age of 23, Bethany Downer has a lot to be proud of. Not only did she make Canada’s Top 30 under 30 in both 2016 and 2017, she can also say that Canadian astronaut Chris Hadfield encouraged her to pursue her dreams of becoming an astronaut. That fateful conversation inspired her to diversify her experiences by taking classes in physics, math and engineering. In 2016, Bethany became 1 of 40 students selected to attend the International Space University in Strasbourg, France for their Master of Space Studies program. With a Bachelor of Science from Memorial University already under her belt, Bethany is the ambitious creator behind Reaching Space Science, an organization that defies scientific jargon and makes rocket science easier for all to understand.

There are only a few people still alive who fluently speak the Nak’azdli dialect of the Dakelh language and 15-year-old Tessa Erickson is creating an app and organizing a summer camp to change that https://t.co/oIVxFakjOn pic.twitter.com/Unuj2AWfe4

When Tessa Erickson, a member of the Nak’azdli Whut’en First Nation from Prince George, B.C., learned about the long-term effects of residential schools—namely, how her family members were forbidden from speaking Dakelh—she became motivated to develop an app that would help fellow young people learn and preserve the language. The ambitious teen received a $50,000 grant to produce this outstanding app and to create a summer camp for youth to learn Dakelh from elders and trained speakers. We’re inspired by Tessa’s initiative to help others through inquiry and creativity—and her hope for a better future.

While working for Natural Resources Canada from 2014 to 2016, Tara Jodoin developed and led an initiative that provided women in STEM opportunities to develop their careers. The Career Alliance 360 – Inspiring Girls in STEM / Indigenous Inclusion project aimed to elevate the representation of women and Indigenous Peoples in STEM. Several wonderful initiatives were taken through four key pilot projects, including engaging Indigenous communities to improve earth observation, providing geospatial technology to Indigenous People in Canada’s North, community outreach in Inuvik, Northwest Territories and more.

Gitanjali Rao, Inventor of the Tethys

When 11-year-old Gitanjali Rao saw her parents testing their water for lead at home, she instinctively knew there had to be a better way to do it. Paired with her awareness of the devastating water crisis in Flint, Michigan, Gitanjali invented the Tethys, a device allowing users to quickly and efficiently detect lead in water. Her incredible and potentially life-saving invention earned her the $25,000 grand prize in the 2017 Discovery Education 3M Young Scientist Challenge. Moving forward, Gitanjali aspires to be either an epidemiologist or geneticist when she grows up–but no matter what she ends up doing, she’s going to change the world!

After the tragic 2010 earthquake that struck Haiti, Andrea Sreshta and Anna Stork invented a revolutionary inflatable solar lantern that helps people who don’t have power. A product of their company LuminAID, the lanterns are inflatable, water proof and solar powered. The lights not only help those without power for extensive periods of time, they’re also perfect for those who like to camp. Andrea and Anna prove that a bright idea can change lives.

Thirteen year old Emma Yang is a thinker, inventor and incredible advocate—but more importantly, she is using her passion and skills to impact the lives of others. She developed an app called Timeless to help people with Alzheimer’s recognize their loved ones. Although the app is still in development, it’s incredible in its scope: it will enable users to scroll through photos of family and friends while also reading through descriptions of who they are. Although she was initially inspired by her grandmother’s experience with the disease, Emma has the potential to create a ripple effect by thinking outside of the box for a better future for all.

How We #PressForProgress: Melanie Croft-White

How We #PressForProgress: Rina Chua-Alamag

How We #PressForProgress: Susan Michez